Of Roaches and Robots

This actually happened several days ago and I intended to blog about it, but with so much else going on in our lives, it’s hard to sit down and tell you about the funny stuff that happens around here.

First, the roaches. No, we don’t live in a garbage dump, but the lovely, genteel South, home of roaches that have no regard for personal space. My personal space! My HOME, for crying out loud!

I love Baton Rouge more than I thought I would when we moved down here almost three years ago. I miss my Delaware County friends, coffeefests and being able to relate to their emails to the group, but I do love it here. I don’t miss snow all that much, except for the picturesque idea of sitting at a winter window with a cup of hot chocolate watching the quiet snow falling outside, cuz, you know, I did that A LOT in PA!

I love my house and I love the friends I’ve met and I go out for coffee with my friends more here than I did in PA.

They get into the house and usually die but sometimes we’ll see one alive. The Terminix guy comes every other month and will come if we see them often inside between visits. The Girl has become a bit phobic about them after getting into the shower and seeing one crawling on the shower curtain on the other side. They like water, see? And if we don’t keep the plugs in the drain, they can get in that way.

They also like the cool so when it gets hot out they like to come into the house.

Well, the Boy is phobic, too, about them and will NOT go into the main bathroom without an adult nearby, especially if the “bug spray” is in there. See, Beloved discovered that roaches “hate to be clean” so a mixture of Ivory dish soap and water is a non-toxic way to kill them. It’s gotten so the smell of Ivory is a dead giveaway that a roach was seen in the house. 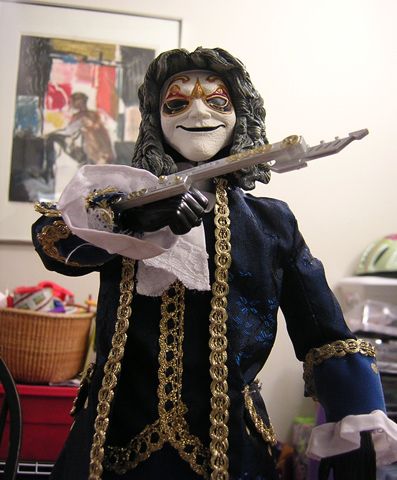 The Boy is a BIG fan of Doctor Who. We have 30+ episodes DVR’d and can’t erase any because the Girl wants to have a Doctor Who viewing party with her friends – has since September…but it hasn’t happened yet, but heaven forbid we erase any just in case!!!!

One of the episodes has the fellow pictured above in it. He’s trying to find Madame de Pompadour at age 37. The episode is called “The Girl in the Fireplace,” and it’s not a bad episode. Some logic flaws (me thinking like writer) but entertaining.

It’s the latest episode we’ve taped (not counting of course the new season which starts tonight) and the Boy has watched it OVER AND OVER AND OVER!! You know, no matter how good something it or cute or whatever, after it’s been watched 352, 897 times in one week, it tends to lose a bit of its appeal. Talk to me someday about the nightmare that IS The Polar Express!!!

Oh, did I mention, he found the button on the remote that goes back about 15 seconds? He will rewind the same 15 seconds over and over and over. He does this with live TV, too. He once did it so much with Little Bear that after an hour, the cable box went live, since it can only pause live TV for an hour. The Boy raced to me in the kitchen and told me the TV was broken because it stopped rewinding Little Bear!!

Anyway, a few mornings ago, he was getting ready for school and as always happens, the moment I get his pajamas off, he has to go to the potty. Only, he won’t go into the bathroom because:

“There are Robots in the bathroom.”

I tried to tell him that there are no robots, but he wanted me to promise and I’m trying to teach him not to just use the word promise without knowing what it means (Mommy, I promise I will get a green – and he comes home with a red), so I said I wasn’t going to promise, but I know there are no robots.

He wouldn’t go in. I asked him if he was Madame de Pompadour and ifÂ  he isn’t, then why would the robots be there? Beloved laughed at my trying to use insane logic on an insane kid!

When he was convinced there were no robots, he started freaking because there might be roaches. We told him there weren’t any, so he slowly, carefully went into the bathroom, only to come screaming back into his bedroom (across the hall where I was waiting) saying he saw one.

You know the story of “The Boy who Cried Wolf?” The Boy in our house sees roaches and robots and monsters everywhere, so Beloved told him there was no roach.

There was something in the way he was crying, I thought maybe he’d actually seen something.

It’s not out of the question. We’re in the South, after all.

Beloved was a little irritated but he went in and sure enough found a dead roach on the bathroom floor.

Only, it was still moving.

Dancing, the Boy called it. See, he freaks about them but when his dad is handling it (killing it and taking it away so Mommy doesn’t have to even SEE it), he thinks “it’s a cute little roach” and starts talking baby talk to it.

Some days I want to say in bed and let the robots and roaches go on without me!

Searching for Spice by Megan DiMaria

Wow, it’s been a long time

Searching for Spice by Megan DiMaria

Wow, it’s been a long time