Who is your Valentine? 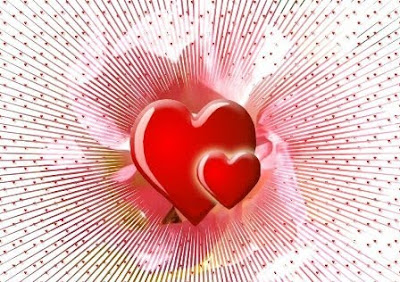 Today is Valentine’s Day and as a romance/fantasy author, I wanted to tell you a little about my Valentine.

We met 25 years ago. I saw him first. He was singing in the church choir with his dad at a Lenten Wednesday night service. The church we attended at the time was populated mostly by older people – elderly or our parents’ age. There were very few young people who weren’t in high school or younger.

My best friend was the deaconess at the church and she was sitting with me when I saw him. I asked her who he was and she told me what she thought his name was and that he was probably a few years younger than I was. I had just ended a relationship with a guy four years younger and the one before that had been that age, too, and I wasn’t eager to meet another guy in that age range.

However, he was tall and cute, so when Jenni introduced me to his mother at the coffee hour after the service I was polite but figured nothing would come of it.

A couple of weeks later I was in the church office on a Saturday (I had been the temporary secretary for awhile and thus, knew my way around the office.). Why I was there on a Saturday, I don’t remember, but I had the door partly closed as it was cold and the heat hadn’t been turned on in the building. I left it partly open so that if anyone came in they’d know someone was there.

He came in. In peeked his head in the door and asked me if I knew anything about the bowling party that was scheduled for that night. I was planning to go myself and I told him who was organizing it.

I went home excited because he was going to be there.

We spent the whole bowling party talking, but when all of us “adjourned” to a nearby pizza place, he didn’t come. I tried not to be upset, telling myself there could be all kinds of reasons why he didn’t come.

The truth was he went to the wrong pizza place!!! He showed up late and he sat at our table and we talked some more.

After that, I asked him to come to another church event and afterward he helped me return some soda to a nearby grocery store. It was then I confessed my dream of being a romance author.

He didn’t laugh. He said he thought that was great.

Maybe I fell in love that night.

That was in March. He went back to school in Boston soon after that and I traveled up there several times to spend weekends with him and he came back to NJ for me. His parents loved me because he came home more often.

We knew pretty early that we wanted to get married, and we did on 4 April 1987.

We’ve been through a lot, together.

I nearly died giving birth to our daughter, Juliette, who was born 9 weeks early and weighed 2 pounds 7 ounces. Steve suffered a lot then because he knew what what happening whereas I was too sick to know.

We knew I could go through the same thing if we got pregnant again, so we decided to adopt which was a horrible experience for us, but ended up happily.

When Juliette was 6, we moved to Germany for his work and two years later, we moved to Pennsylvania. Then we moved again a year later to the Philadelphia area.

While there we went through me almost dying again due to metabolic acidosis for which the doctors had no explanation, but it ended up with me needing to go on dialysis for my polycystic kidneys. Steve gave me a kidney on 20 Feb 2001 (almost exactly 10 years ago).

Then we finally adopted a little boy, Noah, and I got two books published.

We moved again in 2005 to Louisiana, and in the almost 6 years we’ve lived here, I’ve lost 3 family members (a grandmother, an aunt, and my mom) and Steve’s jumped in to get me on flights to Pennsylvania and Ohio as quickly as I could and helped me deal with the sorrow, and in the case of my mom’s death, physical pain as a bout of sciatica started then. Sometimes it was a debate over whether I should suffer the pain to get out of bed or just lie there and hope life would go on without me.

Through all of that, Steve has been a model of Christ’s love of us – giving of himself – sometimes literally – for our welfare. He has seen me at my absolute worst and never noticed. He thinks I’m beautiful whether I’m dressed up to go out or just out of bed with my old bathrobe on and my hair uncombed.

He is the world’s best daddy, drilling Noah on math every night and cheering him on in basketball. He even attended a Justin Timberlake concert with Juliette, which was a really mark of a good father!!

Steven Robert Brandt, you are my Valentine and the most amazing hero a romance author could ever wish for!!!