I was a little stressed this morning. The Girl will be starting college next year and LSU has a thing called the Spring Invitational that outstanding high school seniors are invited to. She got the postcard inviting her a few weeks ago but said she wasn’t sure she wanted to go. However, the teachers started asking who was going and she realized it was something she really wanted to go to. It is essentially orientation and advance placement testing, so yes, she wants to go. So, last night I looked up the information but couldn’t find how to register. I called the orientation office but had to leave a message.

This morning I tried again and saw how to do it, but they also wanted to know if any of her parents would be going to the Family Orientation (three FULL days of workshops, etc. WEEKDAYS). With the Boy it just isn’t practical for me to try to go to it, so after some IMing back and forth to Beloved (most forth as he wasn’t answering), I decided not to go and got her registered. Of course, it cost over $100 which made my stomach roll, but Beloved said (see? He can answer when he wants to) go ahead and pay it.

The card we used for stuff like this is either hard to read or maybe I’m old and senile but it never goes through the first time, so after I got her all registered and made my breakfast, I found an email saying the card had been refused. I had to run through all the registering stuff again and retyped the number, and this time it went through.

After all that, I needed to get out of the house. The Boy needs 12 plastic Easter Eggs with something inside for an egg hunt – no chocolate, and Beloved wanted gold stars for an incentive thing for the Boy, so I decided to head out to Hobby Lobby – my mothership and, while I hate their checkout lines, a place I can go and browse and no one else in the family wants to go with me!

On the way, I had to pass Target. I had about half my Target gift card left and desperately needed bras. I went in and found two bras and some cool crew socks for me. Cool = white. I like fancy cool socks for exercising, but I just need regular socks and it was cheaper to buy six plane white pairs than four colorful pairs, so I decided to be frugal and get the white ones.

On my way out, I went to the purses to look around.

Have you seen this? A place you can rent those big time designer purses mentioned in Kristin Billerbeck’s books or seen on Lipstick Jungle. Yes, I’m a chick lit junkie, but again money keeps me from buying all the books I want. I’m also too poor to even rent a bag from that site. At least one big enough to carry what I want to carry. Maybe when the Girl gets married I’ll splurge and rent something like this.Â

But that’s a tangent (my superpower). I looked at the bags and found this, a Merona Work Tote.Â 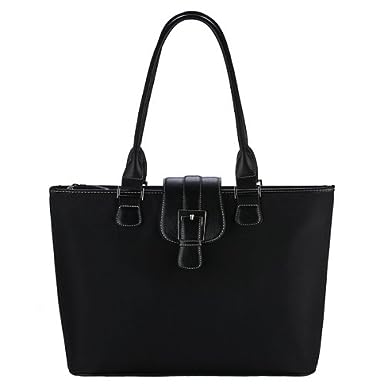 I WANT it. It’s big enough to carry my AlphaSmart and has little compartments inside for wallet stuff and a place for my keys. It’s also $30 and I just couldn’t afford it.

Any family members listening reading? Our anniversary is next month and Mother’s Day is coming up, too. I love this bag!

A note from a fellow Christian writer:

How was your Easter?

A note from a fellow Christian writer:

How was your Easter?